Lucas Serby – A Swedish Star in the Making - Global Man

Lucas Serby – A Swedish Star in the Making 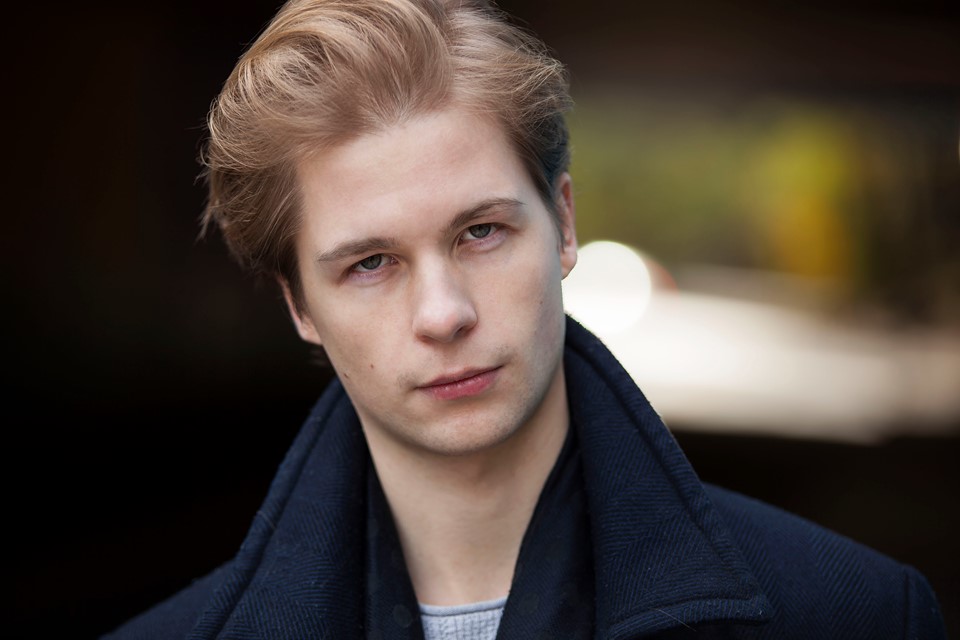 He has already worked with some of biggest stars of the movie and entertainment industry of today and there’s no sign of him slowing down: Lucas Serby is a young Swedish actor, model and creative currently situated in New York City. He is a graduate of the prestigious American Academy of Dramatic Arts, the oldest acting school in the English-speaking world, and an institution that has previously been home to acclaimed alumni such as award-winning actor, director and Sundance Film Festival founder Robert Redford and Hollywood Golden Age legend, Oscar winner and Spartacus himself Kirk Douglas. Lucas was the first of his graduating class to book a part in a professional New York theater production, and has been seen on stages all around the city and on TV by millions since then. He talks to us today about what made him take the leap to pack up his things and move to a different country, what drives him as an actor and overall creative,  and what it’s like to be a part of one the fastest changing industries in the world.

So I’m very curious, what was it that made you decide to move to a completely new country to pursue your dreams? Because as I understand it, you’d never been to New York City before moving there and you didn’t know anybody there?

Yes, that’s true. You know, I was watching this TV show, Sweetbitter, on STARZ pretty recently. It’s about a girl who moves to New York City to… get away, I suppose, but at a job interview she’s asked why she decided to move there all by herself and her answer is “it’s kind of a calling, moving to New York” or something similar, but I think that that’s definitely what it was for me. It felt like a calling. I’m a big fan of Marlon Brando and James Dean and they both got started in New York, so being the romantic that I am I just thought to myself that “of course, there’s no other place to go or that I should go to”.

And bringing it back to you moving there all by yourself without knowing anybody in the city. Did that scare you?

You know what, it didn’t at all. Looking back at it now I feel like I should’ve been absolutely terrified, because New York City is huge and it was a completely new city to me at the time, and that would have been the normal reaction. But I wasn’t. It just felt right to me, like it was meant to be.

Also, my first night there I was staying at a hotel right around the corner from where I was going to go to school, and this was right in the middle of New York Fashion Week so there was a lot of models staying at that same hotel and I got to talking to one of the girls outside, and she asked me what I was doing there, if I was there for Fashion Week and so on. So I told her that I was from Sweden and had just moved there to pursue acting, and after a bit of talking she told me that she wouldn’t mind introducing me to her manager and she gives me her email address and asks me to send her a picture to forward it to him. So I do, and I get a response from the manager basically saying that he thinks I look like James Dean and that we should work together. Nothing really came of it in the end, but I always took it as a sign that I had made the right choice. 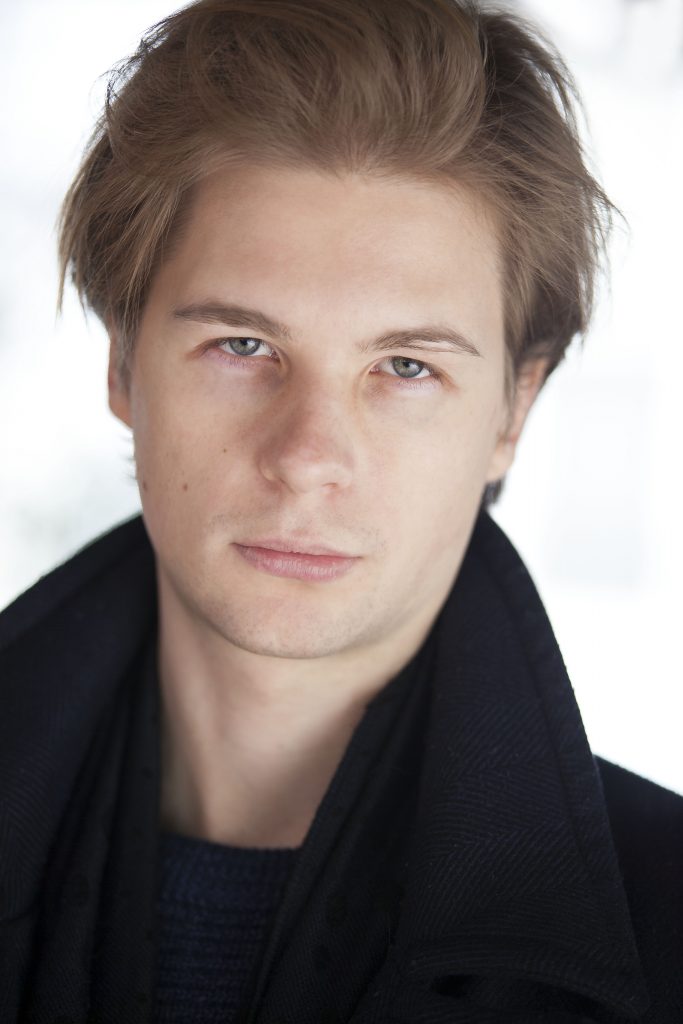 Obviously acting is a big part of your life, what was it that made you want to pursue it?

Well, I started working as an actor professionally in Sweden in my early twenties, but I’d say my relationship with acting goes back way beyond that. If somebody were to ask me about my first love, my answer would always be “movies”. Movies have always been a big, big part of my life for so many reasons, for example one of them being my mom who used to be a movie critic when I was growing up, so I had the privilege of getting to watch a lot of films, many of which that hadn’t even been released yet, so I was very lucky. That definitely fueled my interest. I also had a very vivid imagination as a kid, and I loved to reenact scenes from my favorite films, for instance, one of my earliest childhood memories is pretending to be Simba from the Lion King in pre-school.

A good quote that sums it up, I think, is from an older video I saw of Heath Ledger, another actor that I really look up to, may he rest in peace.

His agent asks him: “So how long have you been acting?”

Steve, his agent, notably confused goes “How old are you?”

I always liked that one.

You say you started acting professionally in your early twenties, what made you decide that it was time to really get into it, so to speak?

It had always been there in the back of my head. Always. But life is life, and things happen, and after school I found myself working in an office, unsure of… Well, unsure of a lot of things in general really. But I was lucky. Incredibly lucky even. At the office where I was working we were an incredibly tight-knit group of people, and the CEO and Founder, who is still one of my closest friends today and like an older brother to me, taught me that I was good enough at a time where I really needed to hear that. It really taught me the value of having a supportive group of friends and the importance of surrounding yourself with people that inspire you and always want what’s best for you. So I just want to give a shout-out to Aria Asgari, I love you brother.

So anyway, I think I just realized at one point that I wasn’t supposed to be working in an office for the rest of my life, and, as cliché as it sounds, realized that you only have one shot at life so you might as well take the chance and pursue what it is that you really want to do. 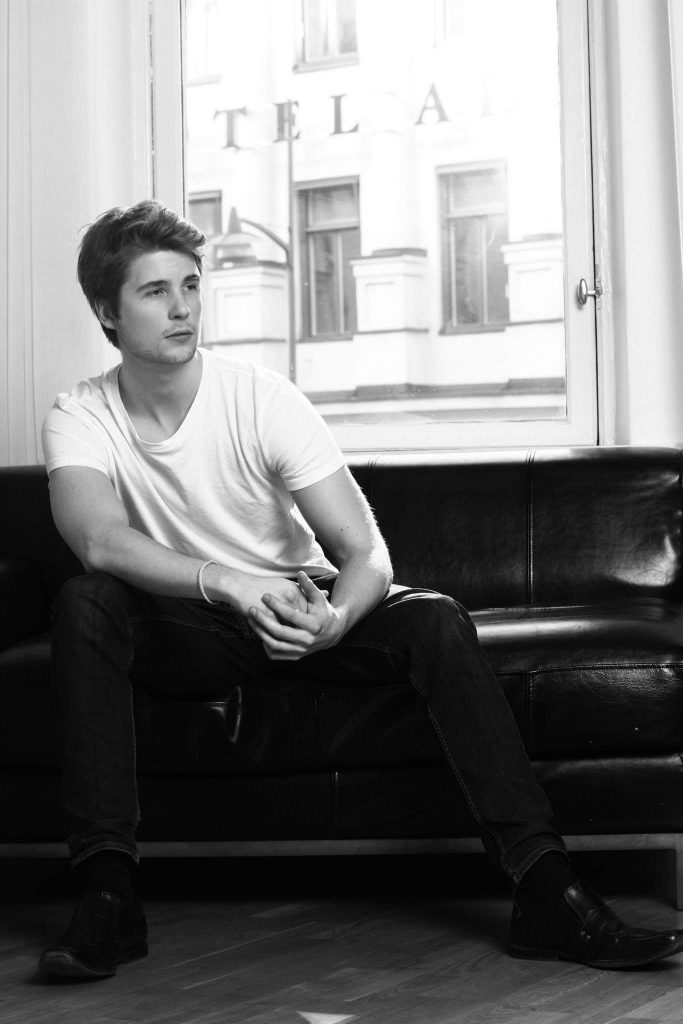 Tell me a little bit about how it is working as an actor professionally in New York and Sweden respectively. What have your experiences been like?

They’re obviously two very different places! But starting from the beginning, I started off in Sweden with not a lot of experience except for a couple of amateur shows, so at first I had no clue what I was doing. I had a few small parts here and there and worked as an extra for a bit, and then it started to finally feel like it was going well when I got a part in the Swedish comedy TV show Jävla Klåpare which aired for a season in 2016. But I quickly realized that as somebody who didn’t have an education as an actor and with very few contacts, Sweden did not have a lot of opportunities, which is why I started looking into moving to the US, which had really always been the plan.

New York City on the other hand is a crazy place. There are so many opportunities, and there’s so much going on, and I’ve been lucky to have met some great people there who have really taken a chance on me. It made me realize that it’s all about who you know. You can have a lot of credits on your resume and a fancy education, but what really matters is if people want to work with you, as a person. We’re also at a point right now where there’s a big shift happening in the entertainment industry, and being in New York City when all of this is going on, you just kind of feel that you’re in the middle of it all, and it’s very exciting.

So tell me about your work in New York, what have you been up to since you started working over there?

I actually started booking jobs even before graduating. I was very eager to start working, and I started going on auditions during the time that the school set up so-called “mock auditions” for us to practice for the real thing. So I’d be in school going on a fake audition, and right after I’d have to leave because I had to attend a real one. It was a very interesting experience.

The first job that I booked was a full rendition of Shakespeare’s The Winter’s Tale with the absolutely fantastic theater company Classics on the Rocks. It was about 3 hours and 30 minutes long, and it was amazing. It was just a great thing to work on right after school because everybody was just so passionate about the work, just like it should be. It’s definitely still one of my favorite productions that I’ve been a part of to this day.

Other highlights include playing Sid Wells on the Investigation Discovery show In Pursuit with John Walsh in an episode that premiered to 1,36 million viewers, and of course working with the Scandinavian American Theater Company. I got to play the part of Jonte in a production of the extremely talented Tanja Lorentzon’s play The Courtyard. I got to work with some brilliant people and the play was seen by a couple of actors that I really admire.

Currently I’m promoting a film called Dead Air which I’m really excited to be a part of. It’s kind of an homage to 80’s horror movies and rock music and it’s a lot of fun. It’ll be playing at several different film festivals this year so I’m really excited about that. 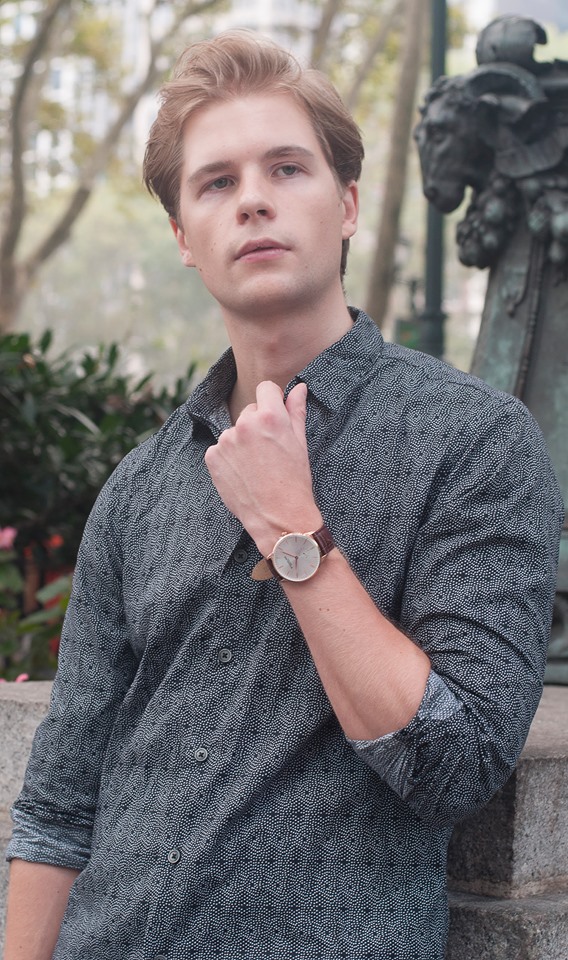 And you’ve also been working as a model over there?

Yes, I’ve been fortunate enough to see what that industry’s like as well. Acting and modeling are similar in a way, but very different in another. They’re both a lot of fun, and I’ve had the privilege to see these big fashion events up close, working with brands such as Louis Vuitton and Ralph Lauren. I hope to do more of that in the future as well.

Finally, you’ve already achieved a lot in such a short amount of time, what is the source of your drive and motivation?

Honestly, I think that, to me, the entertainment industry is one of the most important industries around. What we get to do is to tell and share stories that need to be told, and it’s just such an honor to me that I get to do that for a living. If I can have an impact on just one person’s life through the work that I do on stage or on screen, then it would have all been worth it in the end for me.

Lucas can currently be seen in Dead Air which premieres July 27th at the Peekskill Film Festival.